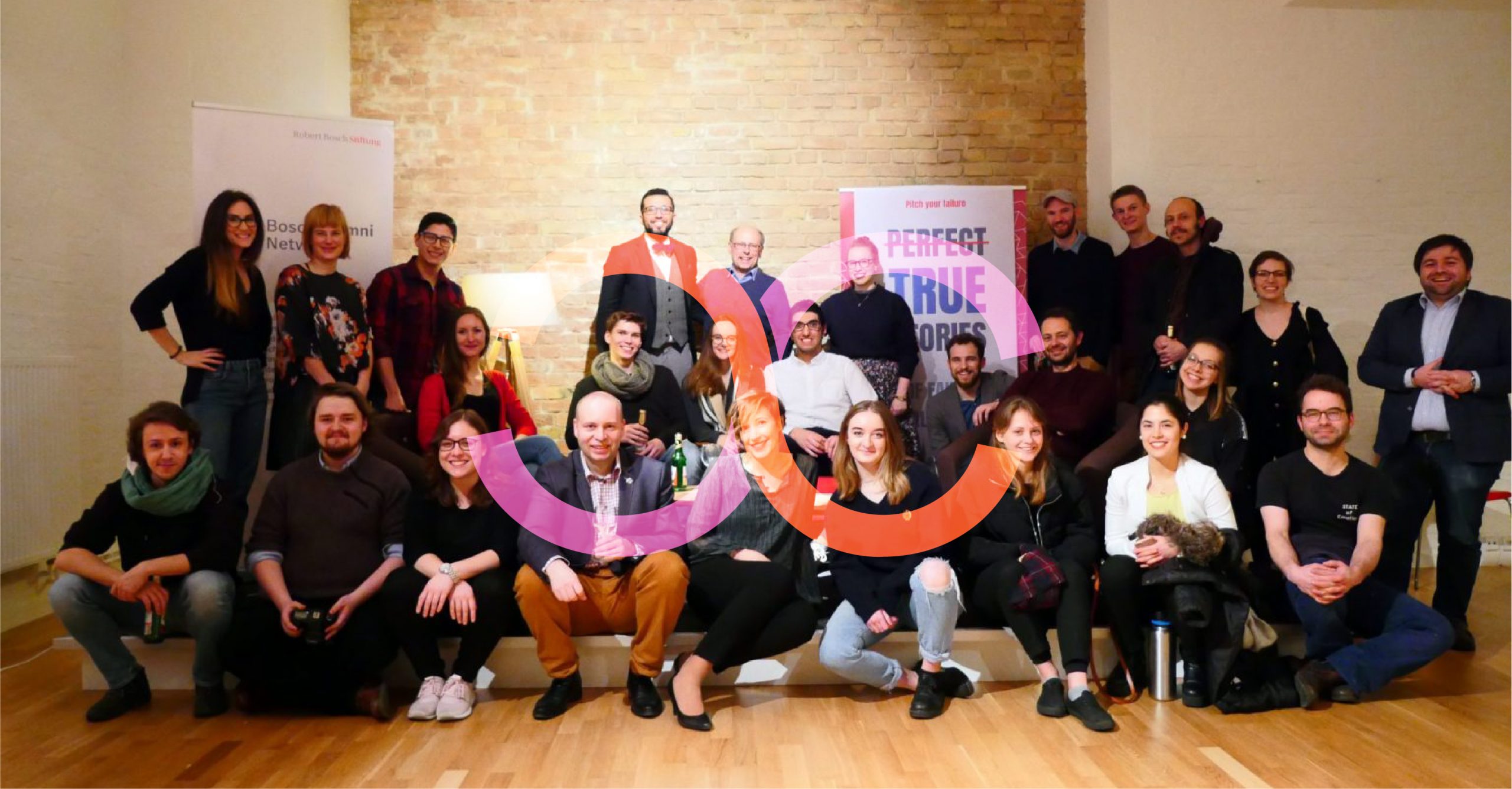 Success lies concealed in every failure After a first successful event held in October 2017 in Rome, Pitch Your Failure hosted its second event in March 2018 in Berlin, to gather young social entrepreneurs to share  true stories of failed social ventures to celebrate their mistakes and learn from the wisdom of their experiences.

We live in a society that tells us to fit in and stand out at the same time. Since childhood, we learn to behave in ways that conform to socially-accepted norms in order to avoid being exposed to criticism and exclusion. In fact, isolation from the group is possibly the single worst punishment for human beings, as we are an extremely social species and in a remote past, exclusion from the group undermined one’s survival. Whilst fitting in seems key to our survival, so is standing out. In fact, to succeed in our achievement-driven culture, we must find ways of getting ahead of others and staying there. We are told that we are only as good as who we know, what we do, and where we live, work, shop… Both drives are highly influenced by other people’s perception of who we are.

Award-winning author Mark Matousek observes that by believing that our identity rests on how others perceive us, “we spend our lives protecting this image, polishing it to get ahead, repairing it when it’s damaged, and moving as fast as we can to keep our personas in place.”1 The reality is that in recent years we have become obsessed with our image. Psychologists refer to this behaviour as “reputation management” whereby we have come to perceive our life as a performance where we are constantly asking ourselves how we are doing and whether we are seen as a success or a failure.

As we strive to appear happy, successful, and strong at all times, our feelings of inadequacy increase. Many of us often feel like a failure without knowing exactly why. Despite all our accomplishments, we still don’t feel like we’re quite enough. Buddhism refers to this unfillable void with the character of the Hungry Ghost, a symbolic being with a pin-sized mouth and a huge belly who is starving because it cannot be fed. Matousek points out that “we are caught up in a delusional story whereby the more we have, the more we need; the more we do, the more seems undone; the harder we work at becoming whole, the more partial and fragmented we feel.”2 The result of this endless yearning for more is that we miss out on all the good that is already present in our lives.

To counter this vicious cycle of performance and idealisation that hinders our authenticity, we must learn that how others see us, is not who we are. In fact, Matousek reminds us that “what [we] do, make, earn, or produce don’t determine [our] value as a human being.”3 To show up authentically, to accept our vulnerabilities, and to share true stories – not perfect stories – is what matters. This is the raison d’être of Pitch Your Failure, which hosted its second evening on Friday, 23rd March 2018 at the International Alumni Center (iac) Berlin, Germany. The event gathered a mixed crowd of 60 young people, changemakers, and other professionals at the International Alumni Center (iac) Berlin to be inspired by the stories of failure of four social entrepreneurs: Amr Dawood from Ireland, Cody Soliman from Germany, Aya Hoteit from Lebanon, and Theo Anagnostopoulos from Greece.

Amr opened the evening by reminding us of the importance of having the right people supporting an idea in order to bring it into life and lead it to success. Bringing together the best teams has been key to his success in several social ventures. Cody reinforced this idea by observing how his unwillingness to work with others on his start-up eventually led the start-up itself to being dismantled when he had to prioritise his studies over work. Aya also touched upon the complications of working with others when there is a misalignment in terms of the vision and mission of the social venture. And Theo concluded the round of presentations by sharing pills of wisdom from his journey to become Ashoka Greece’s first elected Fellow. Importantly, he pointed out that despite the apparent success, failure is still very much part of his everyday life. In fact, with an 80% average failure rate, we must learn to become close friends with it. After the pitches, the guests engaged in a thought-provoking Q&A session with the four social entrepreneurs. The event then concluded with an informal networking session. The journey of Pitch Your Failure started a couple of years ago at the ChangemakerXchange summit in Palermo, Italy. ChangemakerXchange is a programme co-created by Ashoka and the Robert Bosch Stiftung that gathers top young social entrepreneurs to connect, cultivate their wellbeing, learn from one another, and collaborate to amplify their impact. During the Palermo summit, a group of young social entrepreneurs from the Mediterranean region collaborated to bring Pitch Your Failure into life.

Our goal is quite simple: to invite social entrepreneurs to share not perfect stories, but true stories of failures and things gone wrong in their social ventures. We want to share their stories so that we may all learn from failure, so that we may recognise that criticism and judgment hurt, but that we are not driven by success, recognition, and approval. Rather, we are driven by courage and authenticity and we do what we do because we cannot not do it.

The purpose is to dismantle the myth of success, because as spiritual teacher Eckhart Tolle reminds us, “there are cycles of success, when things come to you and thrive, and cycles of failure, when things wither or disintegrate and you have to let them go in order to make room for new things to arise, or for transformation to happen.”4 We must learn that one cannot exist without the other, for “failure lies concealed in every success, and success in every failure.”5 We would like to thank all our partners for their kind support: the International Alumni Center Berlin, the Bosch Alumni Network, the Goethe-Institut, the European Cultural Foundation, Compagnia di San Paolo, Ashoka, and uidu. Without them, Pitch Your Failure would have… uhm…failed! View more pictures here. And should you wish to host your own Pitch Your Failure event in your city, please fill out our interest form.

Written by Greta Rossi, MC for Pitch Your Failure in Berlin.

A CRY FOR HELP, fighting teenage suicide, one step at a timePitch Your Failure @ Athens