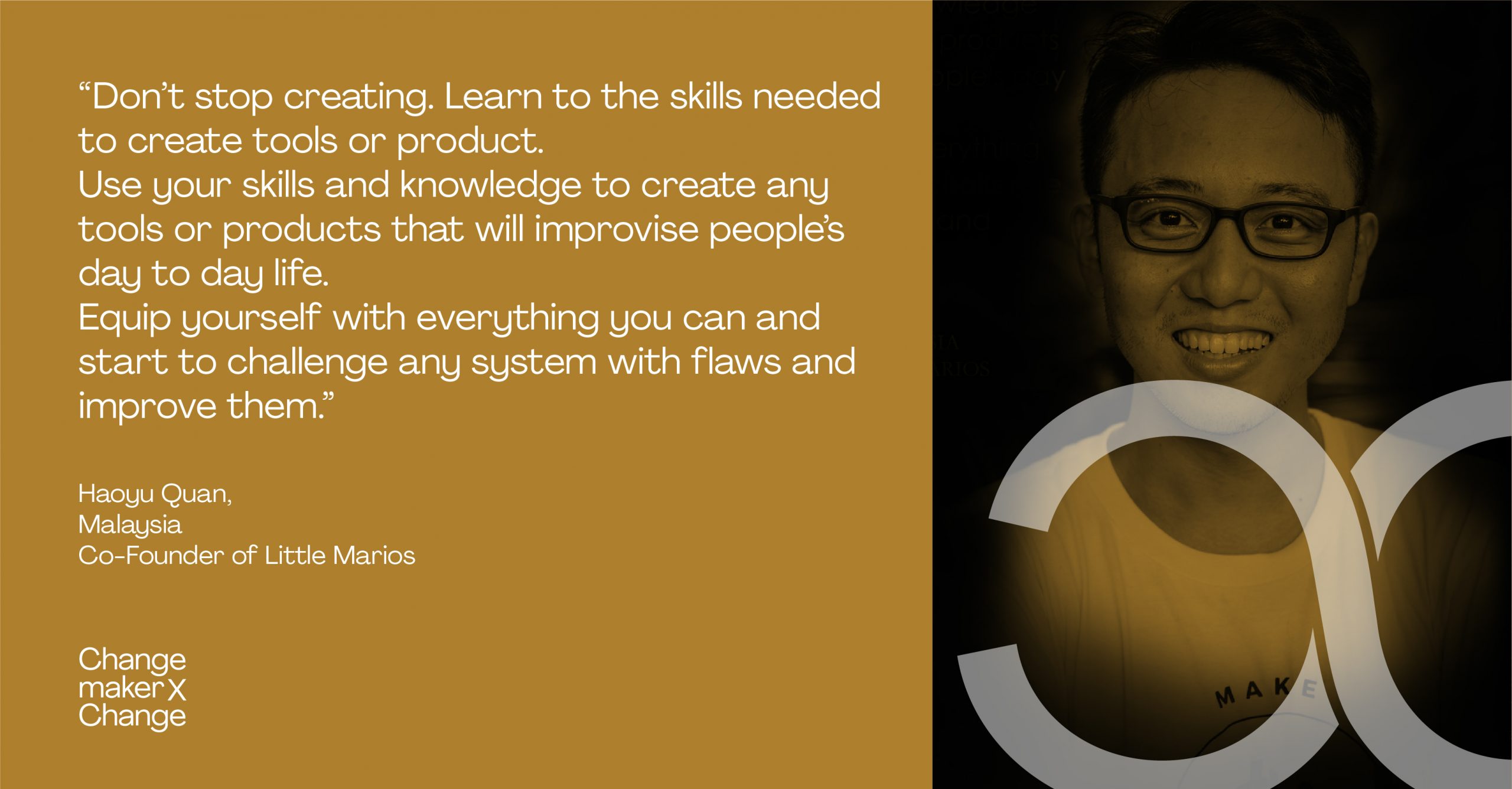 “The ultimate goal of farming is not the growing of crops, but the cultivation and perfection of human beings.” – Masanobu Fukuoka

In the world of aspiring entrepreneurs and changemakers, Quan Hao Yu is far from a strange name. Founder of many projects including his local college’s AIESEC, Homoto, and Little Marios, he is a force of change – an embodiment of the youthful spirit and a symbol of action. He has been actively working in social enterprises to improve the quality of life in his hometown and bring about big changes through his little mushrooms. In a short span of a morning bus ride, when we had a chance to talk with him, we were captivated by what he had to share.

Unlike many social entrepreneurs who rose from hardships and endeavored to improve lives, Hao Yu grew up in a relatively well-off family. But at a young age, he was already aware of his stance in society and felt compassion towards other less fortunate human beings. Many children out there have access to neither good education nor a safe home. And Hao Yu was determined to change that.

At the age of seventeen, he left his home in Kuala Lumpur and travelled to Penang to pursue his studies in electrical engineering. But Hao Yu wanted more in college than just a single degree, so early on he made a dive into social entrepreneurship and created many projects, none of which lasted for long, however. Around the same time, he stumbled upon a chance to turn his lifelong passion for social justice into reality as David Chew – a senior at college – introduced him to an intriguingly strange idea of growing mushrooms from coffee waste. Hao Yu unhesitatingly accepted the offer and both of them started working on the project together. Before long, from a fervent interest in entrepreneurship and a desire to aid underserved communities, Little Marios came to life.

In 2013, David and Hao Yu first pitched their idea at the Youth Social Entrepreneurs Program where they received an advice to incorporate a sense of charity that forever changed the face of Little Marios. “It was a project initially, like the one that Starbucks did. We were just trying to grow mushrooms out of coffee waste, not generating money, you know. But after we took it to an innovation competition, the judge panel advised us to incorporate a social part into this whole project. And that’s what we did – that’s how everything started,” Hao Yu said.

What’s up with Little Marios?

As earlier mentioned, Hao Yu’s dream has always been to improve the quality of life in Malaysia, for children specifically. Combining that dream with what the project had already been doing at the time – mushroom farming – he brilliantly came up with the name Little Marios. Since Hao Yu and his team were already working with a lot of children at the start of the project, they wanted to have a kid-friendly name. And “Mario” sounded just like what they needed; combining that with the adjective “little” that perfectly describes children, “Little Marios” became the official name. Coincidentally, the game involves a lot of mushrooms too!

As of now, Hao Yu has inherited and is single-handedly leading the project as most original founders already went on to pursue other goals or to study abroad. “It was not my idea, it was my leaders’ idea, I was just a co-founder, not the leader. But after they graduated, some of them left, and currently, I’m leading the team.” Nevertheless, their mission remained the same as Hao Yu and his team strives to introduce the potential of mushroom cultivation serving as the main income source for underserved communities.

Earlier, Hao Yu brought Little Marios to pitch at Singapore International Foundation’s Young Social Entrepreneurs Program. He told us he had learned enough to return to Malaysia and use a social entrepreneurship model to develop rural communities through innovative agricultural activities. In the endeavor to kick-start big changes from tiny little mushrooms, the Little Marios team whole-heartedly hopes to impact many more communities, so as to pass on the agricultural knowledge that can be useful for each individual in the communities to earn a budget to build their own dreams.

We were neither part of Little Marios’ team nor part of his community. But after listening to Hao Yu’s pouring his heart out about the projects and the hopes and dreams he attaches to, we were eager to find out more.

How does Little Marios work?

There are three types of social businesses, according to Hao Yu. The first is about non-human-related problems such as the environment, tourism, and food waste. The second one is human related, but people come to those social businesses to seek help. And then there is Little Marios – the third type – which actively makes an effort to go out and seek for people in need. Throughout the year, Hao Yu and his team would go to various children homes and communities to teach them skills in business and agriculture. A little side note, according to the instructions on Little Marios’ website, growing mushroom is just as easy as watering twice or thrice a day and keeping your eyes peeled for any mold!

Basing itself on mushroom cultivation, Little Marios is an extremely self-sufficient model where people can convert agricultural waste into nutritious food and create money-making opportunities. Such is why Hao Yu does not think his project needs funding. Rather, target beneficiaries – the communities – will be involved in mushroom growing and harvesting process, where they can observe the growth of mushroom and harvest them at their own capacity. “Normally mushroom farms just about the size of a bookshelf can generate up to 100 Ringgit. It’s not too much but it’s good because they can save the money for emergency usage,” he said.

At the same time, the Little Marios team also sells their mushrooms to support the communities. “Sell one donate two” is basically how their aid model works. It is effective because once the mushrooms are delivered, communities can choose to either sell them for more profit or just simply cook them for food. “But our model wasn’t always this effective,” Hao Yu noted. “Sell one each gets a portion of one” was Little Marios’ previous model, which was not as successful as their current one because the team would, instead of donating two-fold to communities, split the profit with their beneficiaries. And as the people in the communities would rather stay away from monetary issues, the model did not stand to gain approval. Now, with a handful of mushroom farms set up in lots of children’s homes, the Little Marios team aims for a simple yet effective operation. Every 2 weeks Hao Yu and his team would go to the communities and replenish the packs so that communities can keep on cultivating and selling mushrooms.

Needless to say, like many other social enterprises, Little Marios’ initial journey was fraught with difficulty. Even though mushroom farming is easy to teach and learn, not everyone felt the need to learn the required skills to make money. Instead, over 50 percent of the communities they had visited simply wanted money, not all the hardships involved in making it. One time, Hao Yu and his teammates went to a bungalow to teach old people how to make a living from agriculture. It was very moving to hear how the people there were virtually starving – one old person even held Hao Yu’s hand and asked if he had food. Surely enough, Little Marios was just what those elders needed – a sustainable source of food and income. Yet when it was revealed that Hao Yu did not come to donate money, and instead wanted to teach skills, the community dwellers were immediately disinterested. As a result, the team walked home barehanded.

Another big obstacle in the young entrepreneur’s path was the space required for mushroom farms. Hao Yu had brought his model to many children places such as homes and refugee schools. But normally those places would be very packed, so they had to experiment with growing mushrooms in almost everywhere else instead of inside the classrooms. For instance, one time, they even tried setting up farms on the rooftop, but unfortunately, it also failed to work as the temperature was too hot for the mushrooms to grow. However, they finally figured a few other places to grow the mushrooms better. Some of which were even looped in their own houses and they called them “our house stores”. They have been living happily with the little mushrooms and treating them as their close home friends.

It was also very difficult for Little Marios to sell their products to restaurants or bakeries because their supply – which was mainly bought from vendors – was not guaranteed with consistency. Coupled with the fact that they had to donate two-fold – sell 100 donate 200 for instance – mushroom stock would fluctuate a lot. As a consequence, they were rejected by many buyers.

But in the end, nothing could stop Little Marios and Hao Yu’s resilience. So every new day was another step closer for Hao Yu to actualize his dream. Ever since 2013, Little Marios has been non-stop proving to be a force that drives society forward, and one that has widespread effects all over Malaysia. Farms can now be found in numerous children’s homes. Whether it is in the rooftop of Dignity for Children Foundation classroom, or a new farm in Charis Home, St Joseph Home, or even a boot camp in Lukut, Negeri Sembilan, each of Little Marios’ farms has become a self-sustaining entity of its own, living up to what the project is all about. And that is exactly what Hao Yu’s genius is – he has created his own ecosystem of mushrooms and enabled big changes to happen from the tiniest of things.

As of now, Hao Yu is not entirely certain of how bigger he wants Little Marios to be in the future or how many more farms to be set up at children’s homes. But what we, he, and his lovely communities do know is that Mario is not going to end any time soon. And as long as they all keep trying and staying self-sufficient, the end is nowhere near!