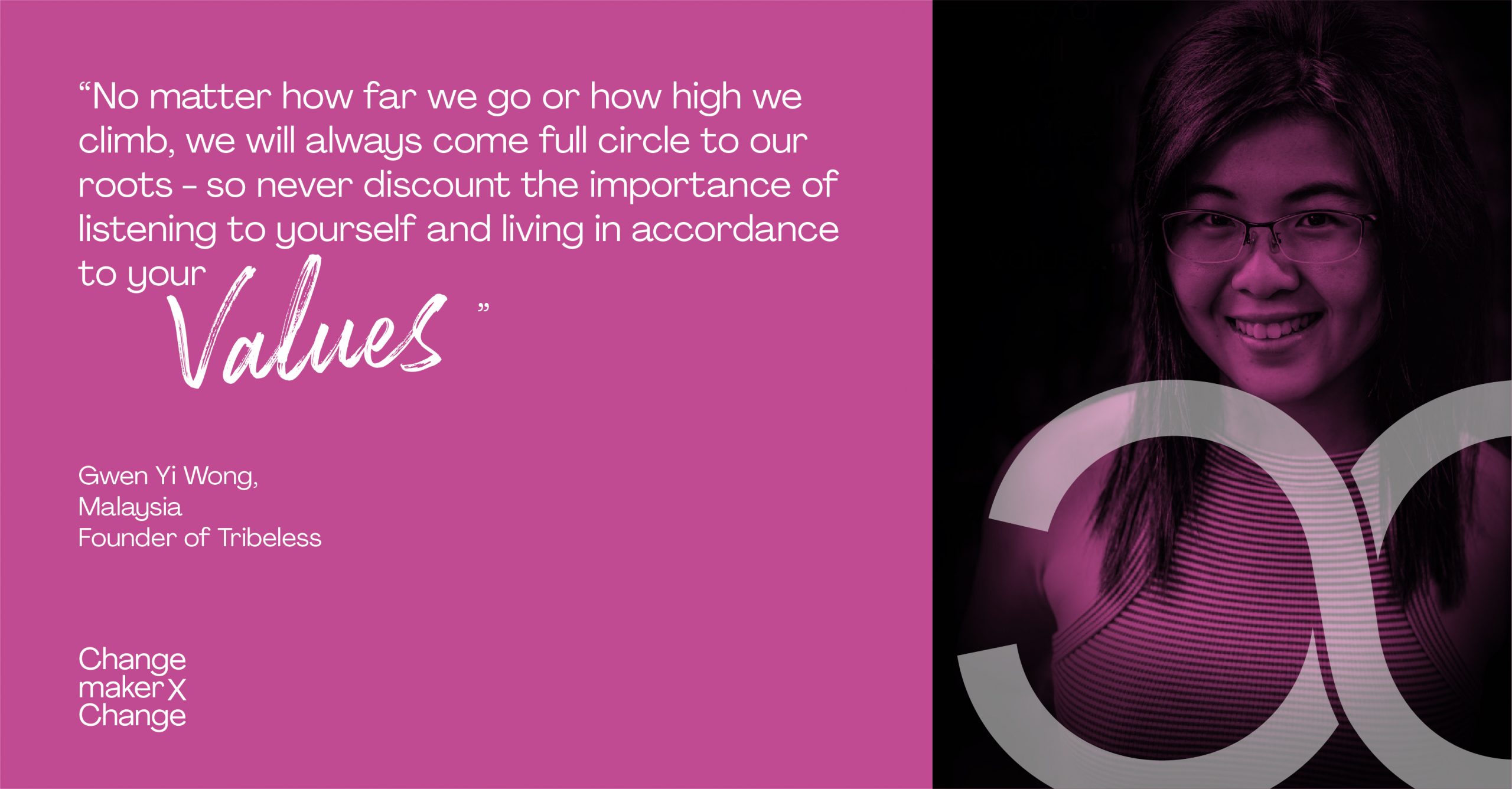 Wong Gwen Yi – or Gwen – is no stranger to connecting people: She has been in charge of marketing TEDxKL, the biggest TEDx conference in Southeast Asia, and building Kuala Lumpur’s tech startup ecosystem with Startup Weekend and Tech in Asia, amongst other projects. She is also no stranger to the hardships of taking the road less traveled, having dropped out of college not once, but twice. The perfect combination for a project like Tribeless. So what exactly is Tribeless?

Imagine this: gathering 10 strangers for dinner, inviting them to share their deepest secrets and inner turmoils, and listening to their stories of love, fear and ambition. Sounds like something straight out of a novel, right? Yet, over 20 dinners have been hosted in Kuala Lumpur and Singapore; with plans to host in Melbourne and Seoul, among other cities. It is a refreshing reminder of the sense of community and camaraderie that is missing in today’s society.

In this tumultuous world, we feel lacking in these attributes at times. Think about it: When was the last time you had a heartfelt, face-to-face conversation with another person? When was the last time you truly felt shaken by someone else’s plight? When was the last time you felt the aching childlike desire to deeply know another? It is perhaps ironic that in this seemingly “connected” world, we are more disconnected than we have ever been. Overly tense professional lives, a focus on the virtual world, and a general sense of stagnation in life have led to a lack of communication and empathy between human beings. This sense of isolation, coupled with a neglect of our general well-being, has led to a rise of mental health problems such as stress and depression in the recent years, and the trend is only going up.

We are burnt out, washed up, and worn down – for good reason.

So how did it come to be?

For Gwen, it is a reflection of her life’s journey.

“I always have had an interest in social impact. All the way back in high school, I was a complete overachiever. I was volunteering for all these conferences, doing all this volunteer work.  So when I went to college, I felt very alone because I realized that nobody else was interested in the same things. So I started organizing small group discussions where we would talk about things that mattered to us. At that time, I was interested in philosophy, so we were discussing topics like, ‘What is the meaning of life?’. It was interesting because you had jocks, cheerleaders, nerds, all these stereotypes coming together to have these deep discussions. They completely broke their stereotypes. That gave me a lot of joy,” she said. “Around the same time, I fell in-love with tech entrepreneurship. At that time in Malaysia, where I’m from, it was an up-and-coming thing. So I transferred my overachiever-ness into that. So I went all out: I learned how to code and build products. I was obsessed with Silicon Valley, Mark Zuckerberg, that kind of stuff. The pinnacle of my story was when I had the opportunity to move to San Francisco. It’s the dream of everyone who’s into tech to go there. And I thought, ‘I’ll be really happy here.’ Turns out I wasn’t. I developed depression. I developed social anxiety. I felt like I didn’t know who I was anymore.”

“Ultimately, I realized how important relationships were, how important social support was. So I came home to Malaysia. I didn’t have anyone to talk to. I was spending my Friday nights alone. Eventually, I told myself: Something has to change. I need to step out of my own bubble. I need to start reaching out to people. I can’t go on like this.” And thus, Tribeless was born.

“So I started organizing these dinners called Tribeless Dinners, in which I would gather – again, similar to what I did in college – groups of people to just come and talk. And the reason they would come is not for a theme like, you know, Republicans versus Democrats or anything. They would come simply because they resonated with the values of openness, of empathy, of understanding other people, and also understanding themselves. The discussions would always be very deep and authentic. People would sometimes reveal things that they wouldn’t even share with their friends or family. Personally, I learned how to be vulnerable. I learned to stop prioritizing my career and my achievements, and to start building relationships instead. Now, I feel like I have come full circle from that time in college, when I was trying to be someone I wasn’t.”

The more dinners Gwen held, the better she realized she was not alone in her plight. Many others were struggling with personal issues and lacked a safe space to explore, grow and connect.

“As I was going through depression and anxiety, I realized that I wasn’t the only one. How many of you have been in a situation where you and your friends are sitting around a table, and all of you are just playing with your phones?” she asked, “How many of you have a personal story that you want to tell people in your life, but you just never had the chance to because they are not accepting? Or even worse, they aren’t giving you a voice? They tell you: ‘No, shut up, just get over it.’ That’s what people told me about my depression.”

Gwen sees Tribeless as an ignition, a spark to begin lighting the fire that is human connection. The project’s success is, according to her, a result of rigorous planning, and a sense of openness and vulnerability from the participants. “How do you build relationships in your life so that you can actually support and trust each other? Paulo Coelho, the author, said: ‘If you want to change the world, you have to go back to a time where warriors would gather around the fire and tell stories.’ I believe we are all warriors. We have gone through so much. We fight our own battles. And the way we can change our world and change other people’s worlds is when we share our stories and own those stories. So, instead of an actual fire, I gather people around dinner, and people will come and talk, and it’s facilitated, so that it’s not like anyone who doesn’t actually care could come in. That’s how we build our community.”

Gwen believes that the Tribeless experience can be replicated anywhere, not just over dinner. “After hosting about 20 dinners across Malaysia and Singapore, we realized we had it down to a science. We were able to create a safe space for everyone to open up and share, no matter how diverse the group was. So, we decided to take the mechanisms of the dinner and turn it into a game. We’re prototyping it; at the moment, it’s  called ‘Tribeless In A Box’. Our ultimate goal is that you can take this game, and you can play it with anyone in your life, and just like that, you can get to know them so much better. You can build stronger relationships with them, which will eventually lead to stronger communities as well.”

Gwen believes she has developed personally along with the growth of Tribeless. “This has been a crazy journey for me. Because Tribeless is so personal, I have had to learn and change a lot about myself in order to grow the business, which is quite different compared to other kinds of business. Say for tech startups, you’d need more users, more revenue, or whatever. But it’s not like that for Tribeless. I feel like the more I grow as a person, the more the company grows as well.”

Gwen’s personal website proudly displays the tagline #30Mby30 – she wants to positively impact 30 million lives by the time she is 30. After having a small talk with her, my team and I did learn a lot of new things and slow down our pace of own life to reflect ourselves from her story. And I do hope that you – the reader – will come out with this feeling as motivated as I did. Who knows? Maybe you will help her reach that goal sooner rather than later.

Living a Life of Service: 3 Lessons from ChangemakerXchangeinclusion, with a lowercase i: Creating a Better World for the Disabled